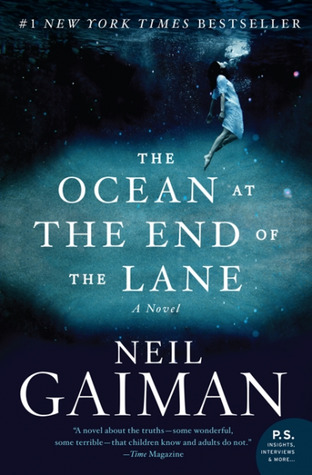 A middle-aged man returns to his hometown for a funeral, but winds up driving down the lane where his house used to be, before it was demolished. A little further, at the end of the lane, is Lettie Hempstock’s old farm, the one next to the little duck pond. Lettie was his friend, but that’s about all he remembers of her. That, and how she used to call the pond “an ocean.” As the man sits by the pond, he starts to remember everything: the Hempstock women, the night with his father and the bathtub, the thing who called herself Ursula Monkton, the night he lost his heart… It all comes rushing back to him, like the waves of the ocean he sits beside, the one that only looks like a duck pond…

When people ask me who my favorite author is, I get this mini-panic attack—THERE ARE TOO MANY TO NAME AND I ALWAYS SEEM TO LEAVE SOME OUT AND QUICK GET ME A PEN AND PAPER I’LL MAKE A LIST. Neil Gaiman is always high-up on that list.

I actually read an ARC of The Ocean at the End of the Lane when it first came out, thanks to NetGalley. Well, truth be told, I only made it through the first 2 chapters before DNF’ing it. I was only 16 or 17 and not interested in Neil Gaiman. In fact, I hadn’t even heard of him yet. I know, I know—what a dumb kid I was. Anyway, in college, I fell in love with Gaiman’s writing and my friend got me this novel for Christmas last year, so it’s fitting that I’ve read it now, a whole year later, around Christmastime.

Ocean is a remarkable tale about a young, nameless boy of 7 who lives in Sussex, England with his mother, father, and younger sister. When the boy makes friends with Lettie Hempstock, an 11-year-old girl down the lane, his whole world is changed forever, even if he can’t quite remember it most of the time.

The novel is told in first-person POV from the boy’s perspective, the nameless “I.” It’s a quick read, told in Gaiman’s unique and spellbinding voice. Though the majority of the novel is a memory from when the boy was 7 years old, I wouldn’t necessarily call this a children’s book. I really like that about Gaiman—he writes stories about both adults and children, meant to be read by/for both audiences. The story is never boring and always mystical and magical, almost like a fairytale with a hint of horror.

The young narrator, though nameless and only 7 years old, is astonishingly relatable in every way. Though he makes silly mistakes, you’re constantly reminded that, again, he’s so very young. But he’s smart, and kind, and thoughtful, too, and perhaps the best trait of all: a reader.

“I was not happy as a child, although from time to time I was content. I lived in books more than I lived anywhere else.”

And he was braver at 7 than I am at 21. In fact, there’s a lot of talk about the distinction between children and grownups in the novel, and I particularly like the part where Lettie tells our narrator that adults are simply children in a grownup shell:

“Grown-ups don’t look like grown-ups on the inside either. Outside, they’re big and thoughtless and they always know what they’re doing. Inside, they look just like they always have. Like they did when they were your age. The truth is, there aren’t any grown-ups. Not one, in the whole wide world.”

Gaiman is an impeccable writer and human being. I had the honor of listening to him speak and read in person, and that’s a moment in my life I’ll never forget. He is a storyteller unlike any other author and blows my mind with each new tale he spins. I am so glad I gave Ocean another chance. I look forward to reading Gaiman’s books for the rest of my life. I hope you’re immortal, Neil Gaiman…

“Books were safer than other people anyway.”

“I was not scared of anything, when I read my book…”

“I went away in my head, into a book. That was where I went whenever real life was too hard or too inflexible.”

“Nobody actually looks like what they really are on the inside. You don’t. I don’t. People are much more complicated than that. It’s true of everybody.”